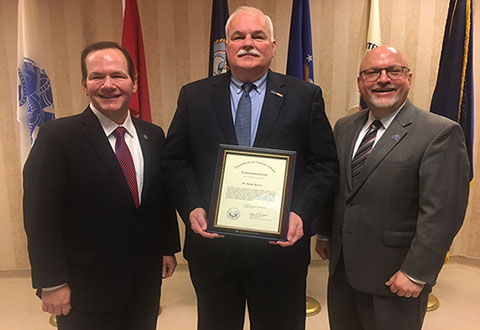 (From Left to Right) Shannon Novotny, VISN 16 Deputy Network Director, Randy Reeves, unanimously nominated as the Under Secretary for Memorial Affairs, and Dr. David Walker, Medical Center Director for the G.V. (Sonny) Montgomery VA Medical Center, in Jackson, Mississippi, following a presentation to Mr. Reeves, for his support to Veterans and VISN 16. Mr. Reeves was presented a Network Director’s Commendation.

The Executive Director of the Mississippi Veterans Affairs Board was recognized by the Director of the South Central VA Health Care Network (VISN 16), during a ceremony honoring Veterans Day, November 9, 2017.

Recently, Randy Reeves, who currently oversees the state of Mississippi’s Veterans Affairs, as Executive Director, and serves as the President of the National Association of State Directors Veterans Affairs, was nominated to be the VA’s Under Secretary for Memorial Affairs. Reeves will now lead the National Cemetery Administration, which maintains 131 national cemeteries and provides burial services for Veterans and eligible family members.

Reeves was recognized for his unwavering support and dedication to VISN 16. The commendation reads, “As the Executive Director of the Mississippi Veterans Affairs Board and President of the National Association of State Directors Veterans Affairs, Mr. Reeves has commanded programs that have benefited and supported Veterans and their dependents throughout VISN 16.    Mr. Reeve’s exemplary leadership, overall federal service, and contributions to the Veterans of VISN 16 has been outstanding.”

Get help from Veterans Crisis Line

If you are in crisis or having thoughts of suicide, visit VeteransCrisisLine.net for more resources.