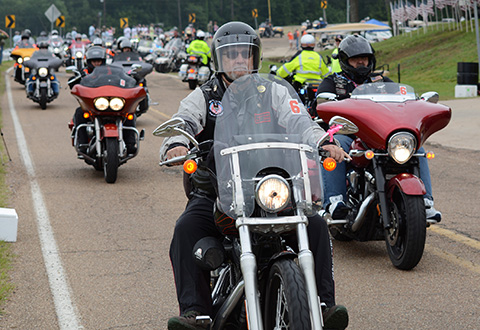 More than 300 bikers, from across the United States, gather during the final day of the Trail of Honor. The bikers will then continue their journey to Washington, D.C., and join thousands of others, in Rolling Thunder 2017.

The Trail of Honor, a tribute to American Veterans, is held each year in Jackson, Mississippi. The City of Jackson hosts the event, to honor Veterans the weekend prior to Memorial Day.

This was the 15th Trail of Honor and attended by hundreds of Veterans, active duty service members, their families, and the community. The Network Director for VISN 16, Dr. Skye McDougall says, the Trail of Honor is a Mississippi tradition, welcoming Veterans throughout the nation and local community.

“I had the opportunity to meet so many of our national heroes,” said McDougall. “Veterans from World War II, to our current conflicts made the time to share their stories and war time experiences. I was very humbled to observe and meet these great people, in what has become a permanent part of this region in Mississippi.”

In 2016, Trail of Honor was named a Top 20 event by the Southeast Tourism Society. Visitors enjoy a short trail walk that includes displays from each American war, from the French and Indian War to Operation Enduring Freedom.  Military equipment and aerial displays were also spotlighted.

This year, The Trail of Honor hosted the Vietnam Traveling Memorial Wall—a miniature replication of the Vietnam Veterans Memorial, in Washington, D.C.

“The Travelling Wall is very special, and I am proud it was scheduled for this event, so close to Memorial Day,” said McDougall. “It is an overwhelming experience to observe. Throughout the weekend, you could feel the camaraderie and what Veterans share in esprit de corps. I am very proud to serve this fine group of American men and women in Veterans Affairs. We are lucky to serve.”

The Trail of Honor weekend culminated, Monday, May 22, as more than 300 motorcyclists ‘Run for the Wall’. Bikers from across the United States, with police escort, gathered at the Trail of Honor, for lunch and fellowship, as they continued their journey to Washington, D.C., and join thousands of others, in Rolling Thunder 2017.

Get help from Veterans Crisis Line

If you are in crisis or having thoughts of suicide, visit VeteransCrisisLine.net for more resources.